In the domains of statistics and data science, principal component analysis (PCA) is an essential tool to analyse... When I was putting together a lesson for my General Assembly students, however, I discovered that the internet resources were either too technical, didn't adequately answer our needs, or presented contradictory information. It's safe to say I'm not "completely happy with the accessible texts" in this case.

As a result, I decided to put together the "What," "When," "How," and "Why" of PCA, as well as links to some of the resources that might better clarify the subject. I'd want to go over the logic for using this strategy, the math behind it, some recommended practises, and any potential downsides.

While I want to make PCA as accessible as possible, the algorithm we’ll cover is pretty technical. Being familiar with some or all of the following will make this article and PCA as a method easier to understand: matrix operations/linear algebra (matrix multiplication, matrix transposition, matrix inverses, matrix decomposition, eigenvectors/eigenvalues) and statistics/machine learning (standardization, variance, covariance, independence, linear regression, feature selection). I’ve embedded links to illustrations of these topics throughout the article, but hopefully these will serve as a reminder rather than required reading to get through the article.

Let’s say that you want to predict what the gross domestic product (GDP) of the United States will be for 2017. You have lots of information available: the U.S. GDP for the first quarter of 2017, the U.S. GDP for the entirety of 2016, 2015, and so on. You have any publicly-available economic indicator, like the unemployment rate, inflation rate, and so on. You have U.S. Census data from 2010 estimating how many Americans work in each industry and American Community Survey data updating those estimates in between each census. You know how many members of the House and Senate belong to each political party. You could gather stock price data, the number of IPOs occurring in a year, and how many CEOs seem to be mounting a bid for public office. Despite being an overwhelming number of variables to consider, this just scratches the surface.

TL;DR — you have a lot of variables to consider.

If you’ve worked with a lot of variables before, you know this can present problems. Do you understand the relationships between each variable? Do you have so many variables that you are in danger of overfitting your model to your data or that you might be violating assumptions of whichever modeling tactic you’re using?

You might ask the question, “How do I take all of the variables I’ve collected and focus on only a few of them?” In technical terms, you want to “reduce the dimension of your feature space.” By reducing the dimension of your feature space, you have fewer relationships between variables to consider and you are less likely to overfit your model. (Note: This doesn’t immediately mean that overfitting, etc. are no longer concerns — but we’re moving in the right direction!)

Feature elimination is what it sounds like: we reduce the feature space by eliminating features. In the GDP example above, instead of considering every single variable, we might drop all variables except the three we think will best predict what the U.S.’s gross domestic product will look like. Advantages of feature elimination methods include simplicity and maintaining interpretability of your variables.

As a disadvantage, though, you gain no information from those variables you’ve dropped. If we only use last year’s GDP, the proportion of the population in manufacturing jobs per the most recent American Community Survey numbers, and unemployment rate to predict this year’s GDP, we’re missing out on whatever the dropped variables could contribute to our model. By eliminating features, we’ve also entirely eliminated any benefits those dropped variables would bring.

Principal component analysis is a technique for feature extraction — so it combines our input variables in a specific way, then we can drop the “least important” variables while still retaining the most valuable parts of all of the variables! As an added benefit, each of the “new” variables after PCA are all independent of one another. This is a benefit because the assumptions of a linear model require our independent variables to be independent of one another. If we decide to fit a linear regression model with these “new” variables (see “principal component regression” below), this assumption will necessarily be satisfied.

When should I use PCA?

1. Do you want to reduce the number of variables, but aren’t able to identify variables to completely remove from consideration?

2. Do you want to ensure your variables are independent of one another?

3. Are you comfortable making your independent variables less interpretable?

How does PCA work?

The section after this discusses why PCA works, but providing a brief summary before jumping into the algorithm may be helpful for context:

We are going to calculate a matrix that summarizes how our variables all relate to one another. 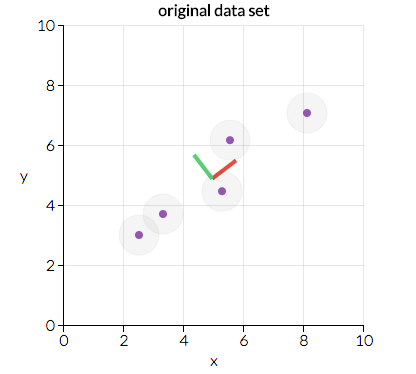 We will transform our original data to align with these important directions (which are combinations of our original variables). The screenshot below (again from setosa.io) is the same exact data as above, but transformed so that the x- and y-axes are now the “red direction” and “green direction.” What would the line of best fit look like here? 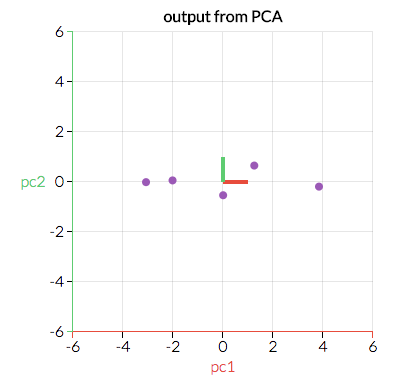 Here, I walk through an algorithm for conducting PCA. I try to avoid being too technical, but it’s impossible to ignore the details here, so my goal is to walk through things as explicitly as possible. A deeper intuition of why the algorithm works is presented in the next section.

1. If a Y variable exists and is part of your data, then separate your data into Y and X, as defined above — we’ll mostly be working with X. (Note: if there exists no column for Y, that’s okay — skip to the next point!)

2. Take the matrix of independent variables X and, for each column, subtract the mean of that column from each entry. (This ensures that each column has a mean of zero.)

3. Decide whether or not to standardize. Given the columns of X, are features with higher variance more important than features with lower variance, or is the importance of features independent of the variance? (In this case, importance means how well that feature predicts Y.) If the importance of features is independent of the variance of the features, then divide each observation in a column by that column’s standard deviation. (This, combined with step 2, standardizes each column of X to make sure each column has mean zero and standard deviation 1.) Call the centered (and possibly standardized) matrix Z.

4. Take the matrix Z, transpose it, and multiply the transposed matrix by Z. (Writing this out mathematically, we would write this as ZᵀZ.) The resulting matrix is the covariance matrix of Z, up to a constant.

6. Take the eigenvalues λ₁, λ₂, …, λp and sort them from largest to smallest. In doing so, sort the eigenvectors in P accordingly. (For example, if λ₂ is the largest eigenvalue, then take the second column of P and place it in the first column position.) Depending on the computing package, this may be done automatically. Call this sorted matrix of eigenvectors P*. (The columns of P* should be the same as the columns of P, but perhaps in a different order.) Note that these eigenvectors are independent of one another.


An example from setosa.io where we transform five data points using PCA. The left graph is our original data X; the right graph would be our transformed data Z*.

Note two things in this graphic:

8. Finally, we need to determine how many features to keep versus how many to drop. There are three common methods to determine this, discussed below and followed by an explicit example: 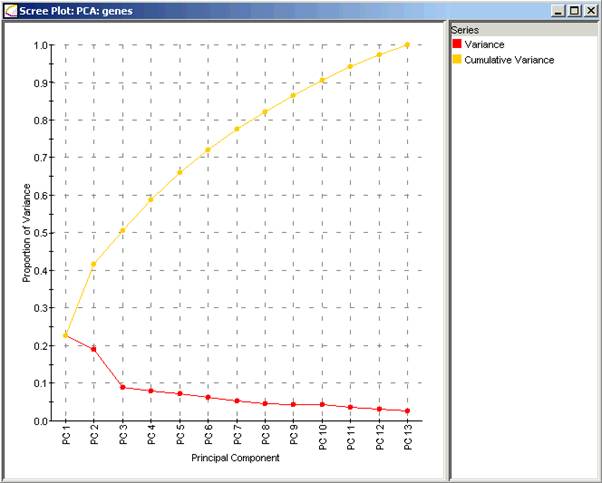 Now let’s go through some examples:

While PCA is a very technical method relying on in-depth linear algebra algorithms, it’s a relatively intuitive method when you think about it.

Thus, PCA is a method that brings together:

1. A measure of how each variable is associated with one another. (Covariance matrix.)

2. The directions in which our data are dispersed. (Eigenvectors.)

3. The relative importance of these different directions. (Eigenvalues.)

PCA combines our predictors and allows us to drop the eigenvectors that are relatively unimportant.

Are there extensions to PCA?

Yes, more than I can address here in a reasonable amount of space. The one I’ve most frequently seen is principal component regression, where we take our untransformed Y and regress it on the subset of Z* that we didn’t drop. (This is where the independence of the columns of Z* comes in; by regressing Y on Z*, we know that the required independence of independent variables will necessarily be satisfied. However, we will need to still check our other assumptions.)

The other commonly-seen variant I’ve seen is kernel PCA.