Natural language processing (NLP) is the ability of a computer program to understand human language as it is spoken and written -- referred to as natural language. It is a component of artificial intelligence (AI).

NLP has existed for more than 50 years and has roots in the field of linguistics. It has a variety of real-world applications in a number of fields, including medical research, search engines and business intelligence.

How does natural language processing work?

NLP enables computers to understand natural language as humans do. Whether the language is spoken or written, natural language processing uses artificial intelligence to take real-world input, process it, and make sense of it in a way a computer can understand. Just as humans have different sensors -- such as ears to hear and eyes to see -- computers have programs to read and microphones to collect audio. And just as humans have a brain to process that input, computers have a program to process their respective inputs. At some point in processing, the input is converted to code that the computer can understand.

Data preprocessing involves preparing and "cleaning" text data for machines to be able to analyze it. preprocessing puts data in workable form and highlights features in the text that an algorithm can work with. There are several ways this can be done, including:

Why is natural language processing important?

Businesses use massive quantities of unstructured, text-heavy data and need a way to efficiently process it. A lot of the information created online and stored in databases is natural human language, and until recently, businesses could not effectively analyze this data. This is where natural language processing is useful.

The advantage of natural language processing can be seen when considering the following two statements: "Cloud computing insurance should be part of every service-level agreement," and, "A good SLA ensures an easier night's sleep -- even in the cloud." If a user relies on natural language processing for search, the program will recognize that cloud computing is an entity, that cloud is an abbreviated form of cloud computing and that SLA is an industry acronym for service-level agreement. 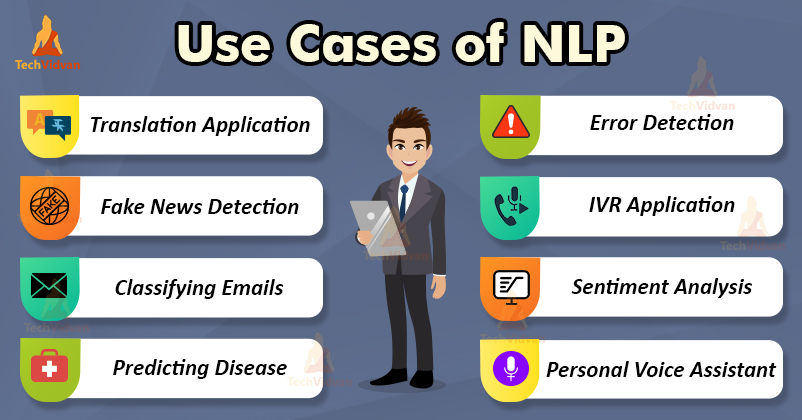 These are some of the key areas in which a business can use natural language processing (NLP).

Syntax is the arrangement of words in a sentence to make grammatical sense. NLP uses syntax to assess meaning from a language based on grammatical rules. Syntax techniques include:

Earlier approaches to natural language processing involved a more rules-based approach, where simpler machine learning algorithms were told what words and phrases to look for in text and given specific responses when those phrases appeared. But deep learning is a more flexible, intuitive approach in which algorithms learn to identify speakers' intent from many examples -- almost like how a child would learn human language.

What is natural language processing used for?

Some of the main functions that natural language processing algorithms perform are:

Research being done on natural language processing revolves around search, especially enterprise search. This involves having users query data sets in the form of a question that they might pose to another person. The machine interprets the important elements of the human language sentence, which correspond to specific features in a data set, and returns an answer.

NLP can be used to interpret free, unstructured text and make it analyzable. There is a tremendous amount of information stored in free text files, such as patients' medical records. Before deep learning-based NLP models, this information was inaccessible to computer-assisted analysis and could not be analyzed in any systematic way. With NLP analysts can sift through massive amounts of free text to find relevant information.

Sentiment analysis is another primary use case for NLP. Using sentiment analysis, data scientists can assess comments on social media to see how their business's brand is performing, or review notes from customer service teams to identify areas where people want the business to perform better.

The main benefit of NLP is that it improves the way humans and computers communicate with each other. The most direct way to manipulate a computer is through code -- the computer's language. By enabling computers to understand human language, interacting with computers becomes much more intuitive for humans.