Suppose that you have to build a classification model on the given Covid-19 data set.You have applied your favourite algorithm and achieved 94% accuracy in predicting Covid Positive or Covid Negative.But still your boss is not happy and threw your model into the trash. You are surprised that model is working fine without any visible defect and with higher accuracy.

Why my Model is behaving insanely?

No, model is actually doing the right thing but my way of training the model is wrong. I am focusing on the wrong thing !

What am I doing wrong?

My Approach is biased with my knowledge of evaluation matrices which are actually befooling me.ACCURACY is not the right matrix when working for the Imbalanced data set.

Confusion matrix gives an interesting overview of how well a model is doing. Thus, it is a great starting point for any classification model evaluation. We summarise most of the metrics that can be derived from the confusion matrix in the following graphic: 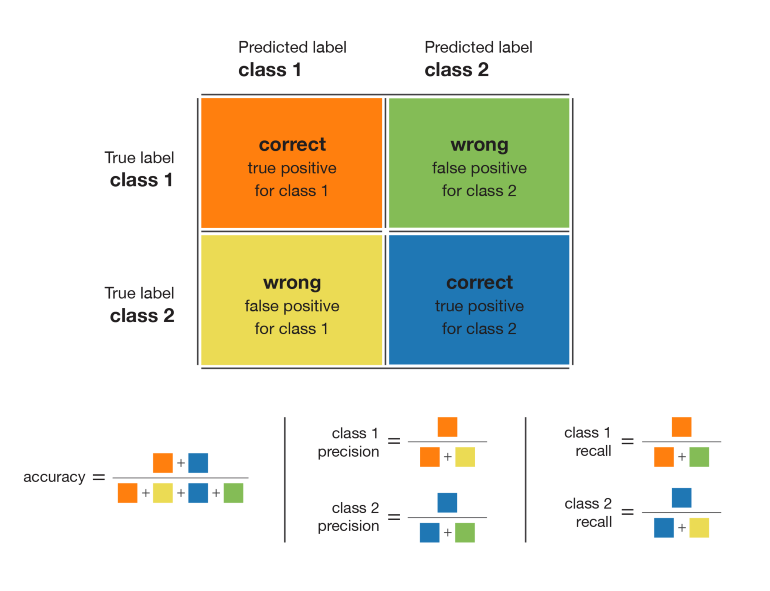 Let us give a short description of these metrics.

The precision of a class define how trustable is the result when the model answer that a point belongs to that class.

The recall of a class expresses how well the model is able to detect that class.

For a given class, the different combinations of recall and precision have the following meanings :

high recall + high precision : the class is perfectly handled by the model

low recall + high precision : the model can’t detect the class well but is highly trustable when it does

high recall + low precision : the class is well detected but the model also include points of other classes in it

low recall + low precision : the class is poorly handled by the model

In our introductory example, we have the following confusion matrix for 10000 products. 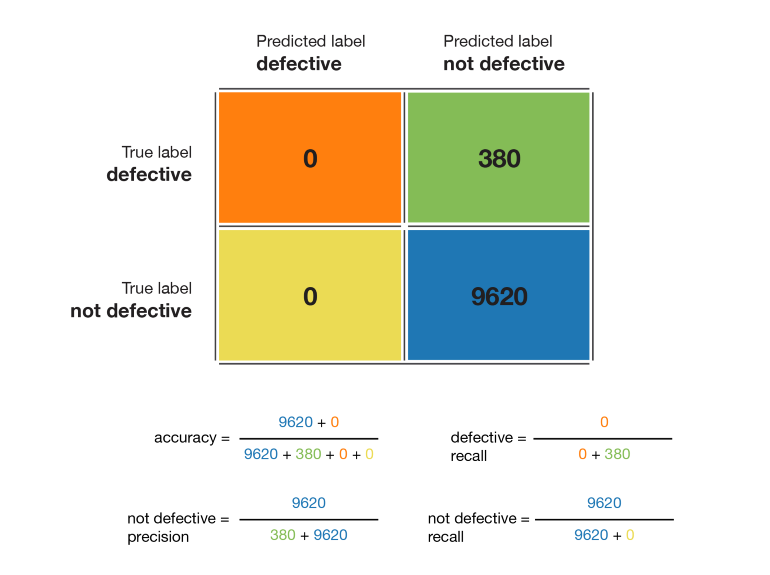 The conventional model evaluation methods do not accurately measure model performance when faced with imbalanced datasets.

Imbalanced datasets can be found for different use cases in various domains:

Finance: Fraud detection datasets commonly have a fraud rate of ~1–2%

Medical: Does a patient has cancer?

A larger dataset might expose a different and perhaps more balanced perspective on the classes.

Accuracy is not the metric to use when working with an imbalanced dataset. We have seen that it is misleading.

Looking at the following performance measures that can give more insight into the accuracy of the model than traditional classification accuracy:

Precision: A measure of a classifiers exactness.

Recall: A measure of a classifiers completeness

F1 Score (or F-score): A weighted average of precision and recall.

Kappa (or Cohen’s kappa): Classification accuracy normalized by the imbalance of the classes in the data.

May be used for unbalanced data sets by setting a high cost to the misclassifications of a minority class example.

Run a lot of tests on multiple models. Intuition can take you a long way in data-science — if your gut tells you that an ensemble of classifiers will give you the best results, go ahead and try it.

In SVM where it is desired to give more importance to certain classes or certain individual samples, the parameters class_weight and sample_weight can be used.

9. Bagging may give interesting results.

Let’s apply some of resampling techniques using the Python library imbalanced-learn. It is compatible with scikit-learn and is part of scikit-learn-contrib projects.

We will also create a 2-dimensional plot function, plot_2d_space, to see the data distribution using PCA (Because the dataset has many dimensions and our graphs will be 2D, we will reduce the size of the dataset using Principal Component Analysis (PCA)

You can change the dataset that you use to build your predictive model to have more balanced data.This change is called sampling your dataset and there are two main methods that you can use to even-up the classes:

Over-sampling: You can add copies of instances from the under-represented class called over-sampling (or more formally sampling with replacement), or

Under-sampling: You can delete instances from the over-represented class, called under-sampling.

It aims to balance class distribution by randomly eliminating majority class examples. This is done until the majority and minority class instances are balanced out.

It can discard potentially useful information which could be important for building rule classifiers.

The sample chosen by random under sampling may be a biased sample. And it will not be an accurate representative of the population. Thereby, resulting in inaccurate results with the actual test data set.

Unlike under sampling this method leads to no information loss.

It increases the likelihood of overfitting since it replicates the minority class events.

It increases the size of the training set and the time to build a classifier.

Tomek links are pairs of very close instances, but of opposite classes. Removing the instances of the majority class of each pair increases the space between the two classes, facilitating the better classification.

In this algorithm, we end up removing the majority element from the Tomek link, which provides a better decision boundary for a classifier.

This technique performs under-sampling by generating centroids based on clustering methods. The data will be previously grouped by similarity, in order to preserve information.

Makes use of K-means to reduce the number of samples 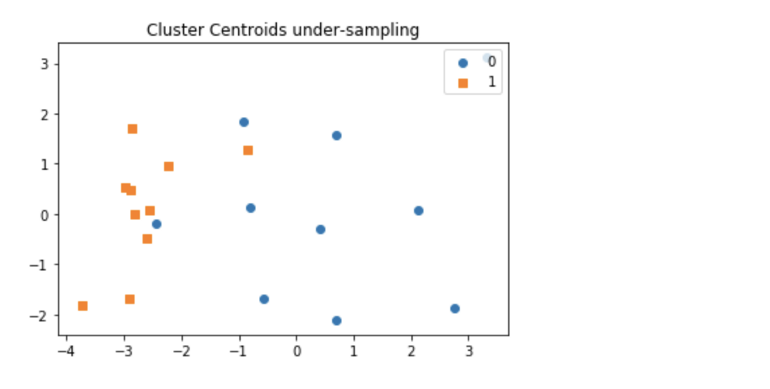 A simple way to generate synthetic samples is to randomly sample the attributes from instances in the minority class.

SMOTE (Synthetic Minority Oversampling Technique) consists of synthesizing elements for the minority class, based on those that already exist. It works randomly picking a point from the minority class and computing the k-nearest neighbours for this point. The synthetic points are added between the chosen point and its neighbours.

No loss of useful information

While generating synthetic examples SMOTE does not take into consideration neighbouring examples from other classes. This can result in increase in overlapping of classes and can introduce additional noise

SMOTE is not very effective for high dimensional data

E.2 Adaptive Synthetic Sampling (Borderline-SMOTE and ADA-SYN) The essential idea of ADASYN is to use a weighted distribution for different minority class examples according to their level of difficulty in learning, where more synthetic data is generated for minority class examples that are harder to learn compared to those minority examples that are easier to learn. As a result, the ADASYN approach improves learning with respect to the data distributions in two ways: (1) reducing the bias introduced by the class imbalance, and (2) adaptively shifting the classification decision boundary toward the difficult examples.

We previously presented SMOTE and showed that this method can generate noisy samples by interpolating new points between marginal outliers and inliers. This issue can be solved by cleaning the space resulting from over-sampling.

In this regard, Tomek’s link is one of the cleaning method that has been a problem solver.

The other SMOTE variants and ADASYN differ from each other by selecting the sample ahead of generating the new samples.

KMeansSMOTE — uses a KMeans clustering method before to apply SMOTE. The clustering will group samples together and generate new samples depending of the cluster density.

When dealing with mixed data type such as continuous and categorical features, none of the presented methods (apart of the class RandomOverSampler) can deal with the categorical features. The SMOTENC is an extension of the SMOTE algorithm for which categorical data are treated differently.

SMOTEBoost is an oversampling method based on the SMOTE algorithm (Synthetic Minority Oversampling Technique). SMOTE uses k-nearest neighbours to create synthetic examples of the minority class. SMOTEBoostthen injects the SMOTE method at each boosting iteration. The advantage of this approach is that while standard boosting gives equal weights to all misclassified data, SMOTE gives more examples of the minority class at each boosting step.

RUSBoost achieves the same goal by performing random undersampling (RUS) at each boosting iteration instead of SMOTE.

12. One interesting approach to solving the imbalance problem is to discard the minority examples and treat it as a single-class (or anomaly detection) problem. Isolation Forests that attempted to identify anomalies in data by learning random forests and then measuring the average number of decision splits required to isolate each particular data point. The resulting number can be used to calculate each data point’s anomaly score, which can also be interpreted as the likelihood that the example belongs to the minority class. Indeed, the authors tested their system using highly imbalanced data and reported very good results. Nearest Neighbour Ensembles as a similar idea that was able to overcome several shortcomings of Isolation Forests.